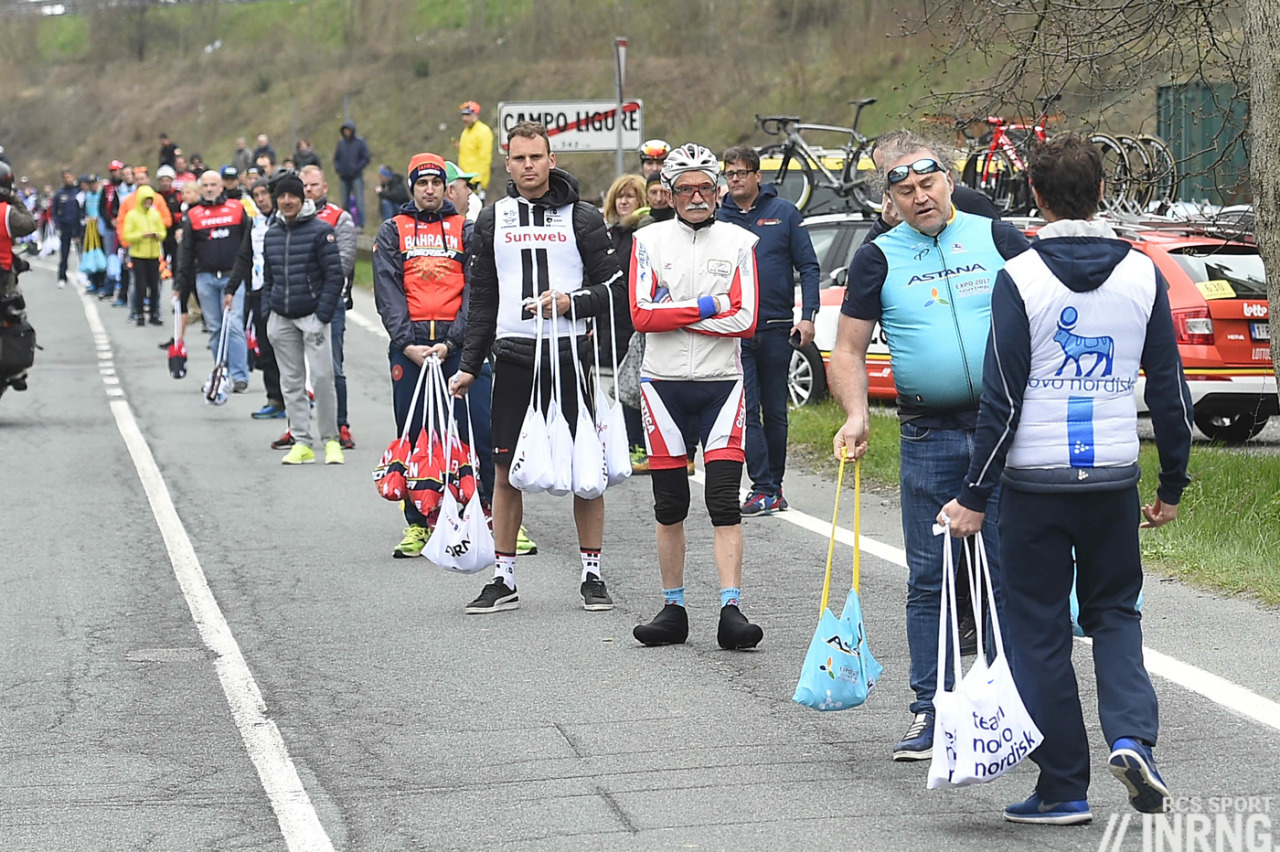 A new UCI rule (2.3.025) says soigneurs must stand no more than one metre from the kerb when handing up musettes to riders in the feedzone. The problem is self-fulfilling where once a soigneur stands in the road, the next must stand a little further out in order to be see and be seen and with, say, 20 teams in race the feedzone becomes an obstacle course.

The idea is noble, to stop staff from crowding the road and getting in the way of the race. But in practice? Who will be there to measure the gap, it’s unlikely commissaires will be there with measuring tapes but the most egregious examples could see fines imposed, especially via the new video truck (to pre-empt the “it’s a UCI money spinner” comment, remember race fines levied go to the local federation). So it’s a nice idea, hard to enforce, but could help. Ideally the whole idea of concept of handing up food could be redesigned, not just the amount by which soigneurs stand in the road but the space between them. Why not have zones of 25 metres per team and maybe set an order to the teams? Anything to create more space and order in this chaotic moment.

Onto rule changes that are more serious and the MPCC group of teams is calling for more blood tests and for them to be done closer to the start and finish of a race. It follows a conversation with Georg Preidler who rode for two member teams Sunweb and FDJ prior to be banned in the wake of Operation Aderlass. He seems to have informed them about his methods and the implication is he was able to infuse red blood cells prior to racing and then drain off blood soon after. But if the blood test on riders is at 8.00am and the race starts at midday then there’s a wide window after the tests to infuse stored blood. It makes sense and shouldn’t be too hard to do as it’s just changing the timing. A bit harder but testing riders more randomly during the off-season can help too as it’s expensive and awkward for blood dopers to keep up their profiles; the same for riders going to “altitude training” camps at relatively low altitude, this can be a ruse to game the profiles.

Staying with anti-doping and the UCI is looking at moving its anti-doping operation, the Cycling Anti-Doping Foundation, into the International Testing Agency (ITA). The ITA is an agency created by the International Olympic Committee to help run anti-doping programmes for sports federations, the idea being that an outside agency can manage conflicts of interest better and also because the agency can cover several sports at once it can make savings on shared costs like admin, rent and so on. It sounds useful… only cycling’s CADF is doing a reasonable job so far and it looks like the imperative to fold the CADF into the ITA is from UCI President David Lappartient with allegations this will get him into the good books of the IOC because a medium size federation would bolster the ITA’s operations substantially. Some teams are making noises against this but it’s surely not for them to decide, no more than a chemicals producer should get in deciding how environmental regulations applied to them? But the CADF doesn’t get much of a say either and the IOC isn’t going to mediate.

The UCI has buried the “Classics Series”. How many people knew what this was? The UCI’s own definition is “around 20 one-day races, among the most prestigious or organised in strategic countries, will make up the UCI Classics Series” and all these were among the World Tour, so in short it was a pooled series of the World Tour one day races. There was even talk of pooled TV rights so that the series could be packaged, sold and broadcast as a whole. At first glance something that few knew or cared about not happening is barely news but the underlying disputes between the UCI and the Velon teams is behind this and so the story is once again one of stalemate and pro cycling in 2020 and 2022 should look a lot like it did in 2012. 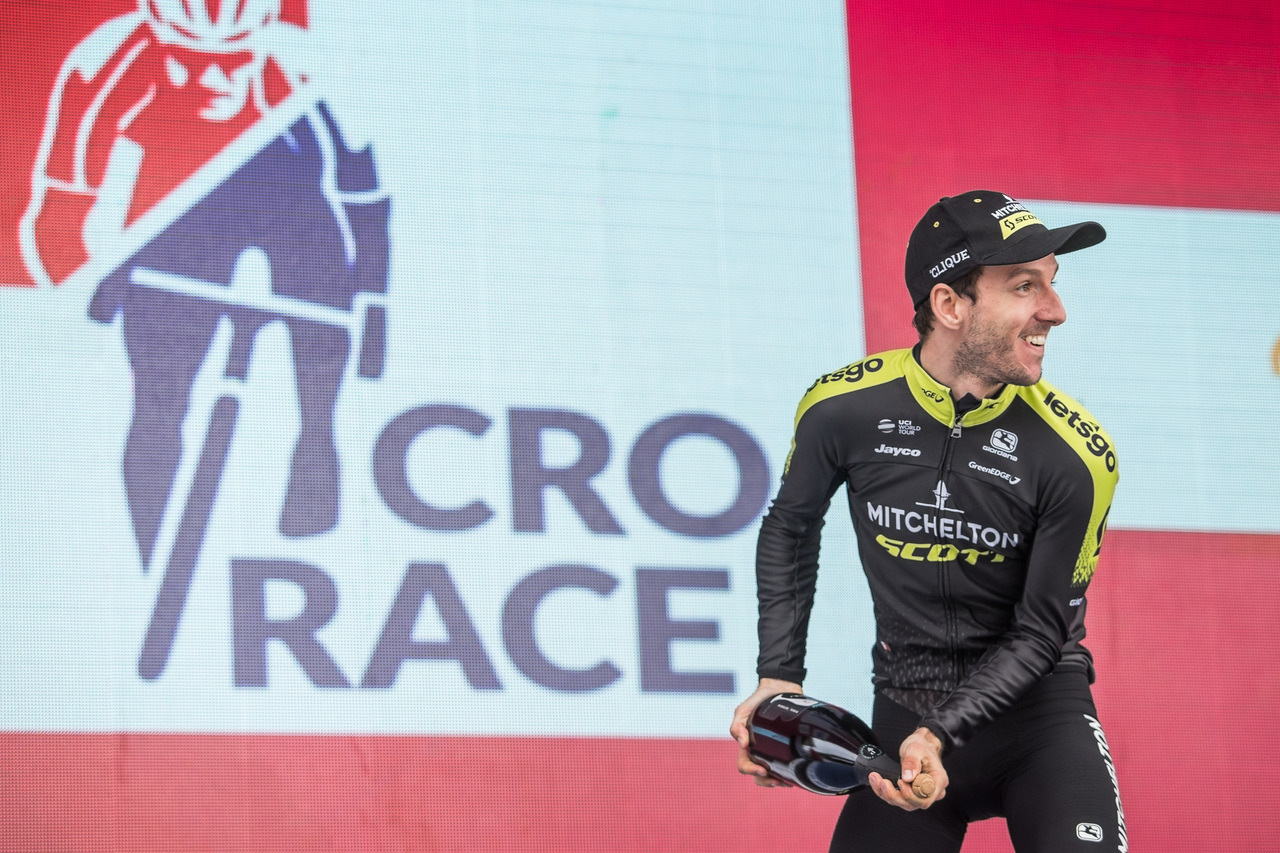 Lastly on the UCI, they announced the World Tour teams for 2020 and Mitchelton-Scott don’t yet have a licence. Rhe new season is just over a month away. Sometimes though this can be due to some missing paperwork rather than anything more fundamental and nobody seems in a flap about this so hopefully it’s resolved otherwise they’re suddenly a Pro Team, the new name for Pro Conti, if they’re lucky.

The 2020 release came out and several teams saw name changes, like Wanty Gobert becoming Circus-Wanty Gobert as existing sponsor Circus moves up to become a naming partner. Naming rights are valuable and expensive and ought to be a big deal… only the first we heard of several team name changes was the UCI press release rather than teams breaking the news. 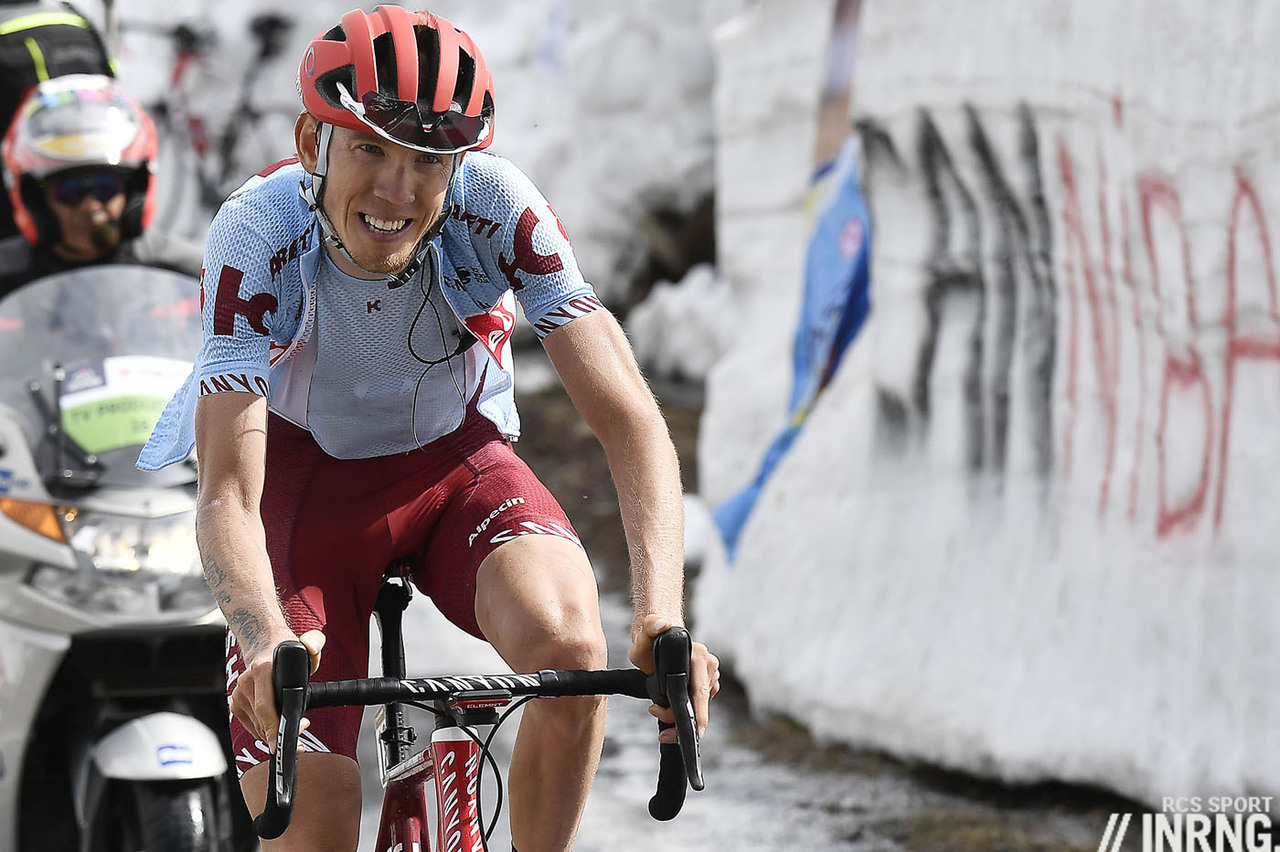 WADA has banned Russia but this doesn’t mean Russians are banned. It’s more of a ban on the country and its sports officials than athletes and as long as cyclists like Ilnur Zakarin or Pavel Sivakov can get clearance that they’re not on the (manipulated) computer files then they’re clear to ride under a neutral flag at the Olympics.

Enough sports admin, some good news about the open road: the Poggio is viable. Closed after torrential rains had led to big crack in the road on the first ramp, the road was then partially closed. Now it’s open. Works are still needed but if the road is usable on a temporary basis today then it should be ok for Milan-Sanremo next March… barring any more natural disasters.

This blog’s Roads to Ride section is popular as people browse for the famous roads. A recurrent question is when to visit the high mountain passes. June to October is the simple answer, spring may begin in February for the likes of the Poggio and reach Flanders by April but the big Alpine passes are typically closed until late May and often still bitterly cold at the top.

Lastly the 2024 Paris Olympic games will hold the surfing contest in Tahiti, halfway around the world. Why not hold the road cycling events elsewhere in France rather than the current plan to lap Paris and its suburbs? Already there’s talk of alternative venues for the MTB events but that Paris will still come out on top. Maybe it’s time for the sprinters to have a chance but the risk is the longest events of the Olympic Games are only worth watching for the final kilometres. Imagine a 250km one day race across the Alps or Pyrenees…