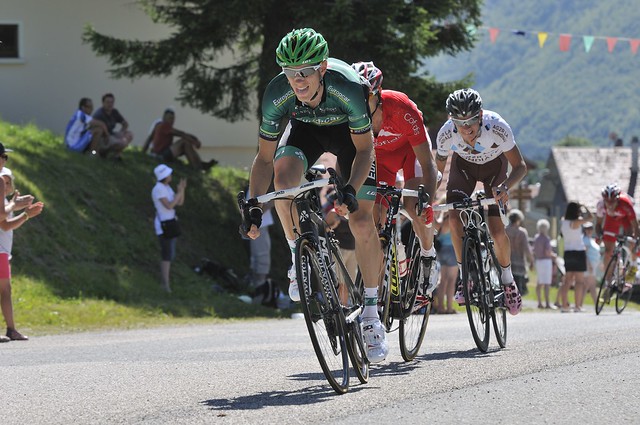 La polémique. Yesterday’s news from L’Equipe.fr that Pierre Rolland should not have started the final stage of the Dauphiné has caused an obvious fuss for French cycling featuring a big name, being weeks from the Tour de France and, like it or not, bringing the suspicion of dopage.

The first thing to note is that this is not an anti-doping measure. Instead it is for health reasons and if Rolland is not enjoying the headlines the silver lining is that he’s now able to rest and recover from a potential health scare. But what is this test and what happened with Rolland during the Dauphiné?

Medical Explainer
Cortisol is hormone produced by the adrenal glands which sit on top of your kidneys. When confronted with a shock these glands produce adrenalin but also cortisol in response to the stress. Skimming the medicine it has two effects, one is anti-inflammatory and the other is to help the body access more energy. In both cases there are advantages to an athlete and doping with cortisone has existed for decades. Aching muscles hurt less and instead of a surge of adrenalin, the cortisone provides a more sustained boost. Abuse has a catabolic effort, breaking down muscle tissue. Several ex-riders from the 1970s and 80s have stated they had major problems, for example two time Tour winner Bernard Thévenet, the man who dethroned Eddy Merckx said “I was doped with cortisone for three years, I’m now unable to ride a bike.”

Note the difference, cortisol and cortisone. When someone starts taking big doses of cortisone, perhaps via injection, the body stops producing the natural cortisol.

The Health Check
The MPCC “health check” sees riders on member teams tested for their cortisol levels. Like an anti-doping test this is random, there’s little warning and the tests could occur at any race. Low cortisol levels are indicative of cortisone doping (or approved cortisone use by a Therapeutic Use Exemption) or a health problem, perhaps a disease or a concern with the adrenal glands so it’s good to stop them in any case. If the rider were to, say, crash then the body would respond by producing cortisol for the inflammation but a rider with low levels could not and therefore the body’s natural ability to recover is endangered. This is particularly worrying in the case of a head injury where the body cannot produce its own anti-inflammation response to a cranial injury. This testing is above and beyond anything WADA or the UCI do, the use of cortisone is legal these days. It was banned in the past and WADA is monitoring with a view to banning it again but this is far from certain.

The Delage Case
A year ago FDJ’s Mickaël Delage was stopped from riding the French national championships after a low level was detected. But the matter was cleared up after he showed the team doctor had advised him to take a medicine for bronchitis, a spray to inhale. The team showed the prescription and the matter was cleared. But Delage saw his name in the newspapers for all the wrong reasons. As ever the “rider stopped” headlines create a bigger splash than “rider cleared” news.

The Charteau Case
Before Delage we had Anthony Charteau, the 2010 Tour de France King of the Mountains. He was stopped at the Four Days of Dunkirk for low levels of cortisone after another check by the French Federation. At the time he said he could not explain the result but that he’d been racing a lot and fatigue could be to blame. He underwent tests but the actual explanation or a hypothesis backed by data doesn’t seem to be forthcoming.

The Europcar Case
Just before the Tour de France last year it was announced that the Europcar team was being investigated for cortisone abuse by the police. It made the headlines and TV bulletins right before the Tour. But when the case was dropped because the police found nothing the coverage was predictably disproportionate.

Pierre Rolland
All this brings us to Pierre Rolland. He’s now sucked into a polemic about his cortisol levels. L’Equipe’s print edition sets out the chronology:

Presumably phone calls were made to stop Rolland. It’s here the case takes a twist. The team claimed a slight problem with his Achilles tendon as the reason why he pulled out… but 24 hours later L’Equipe reported that he was instructed not to start but his team ignored this. If Rolland or Europcar were clearly told they could not start but they ignored it then they risk trouble for ignoring the MPCC rules. There’s a now dispute between the team and the French Federation’s doctor Armand Mégret over whether Rolland could start. Europcar manager Jean-René Bernaudeau sayed tests were done too early, too soon after breakfast and that Dr Mégret said it was ok to start. Mégret was contacted by L’Equipe and said Bernaudeau’s claims were “scandalous and inadmissible.” It means the case is growing from one about a rider’s health to the systemic issue of teams and the MPCC.

There’s also the health issue: if the team knew Rolland’s levels were low, what was he doing in the race? The answer is that if Rolland’s levels were low, they were not zero. Of the 42 riders tested the average reading was 600 nmol/L but Rolland was on 107 nmol/L and the team contested the way the way the tests were done early in the morning. The Europcar doctor Hubert Long decided that it was ok for Rolland to start because the levels were not so low and suspected the results were distorted by an early test.

What next for Rolland?
The case will rumble on but for now Rolland still needs to explain what happened. He’s taken to Facebook to explain that his levels were “low” but not “collapsed” as reported. He wrote “today my image is affected. Note that I race to win races and to be known for my values and not have fingers pointed at me” and if it’s good to see him comment, this is no firm denial. But note Rolland is one of the peloton’s few riders without an agent and if he puts something on Facebook, it’s his words and we can’t expect him to master crisis management. I’m not in the business of advising Europcar but public relations 101 says they need to get all the facts out to the media as quick as possible especially as they’re trying to sign a deal with a sponsor and this coverage is so toxic.

Conclusion
Chapeau to the MPCC for testing and the French Federation too. These tests are limited to MPCC members and the French licence holders meaning the likes of Team Sky, BMC and Radioshack are not checked. There are good reasons for cycling as a whole, under the UCI, to test for cortisone abuse. Until then let’s hope these big budget teams can afford to join the MPCC if only to have equal testing.

The problem with being rested is the suspicion of dopage. Other sports don’t even look at cortisol levels so they don’t get the negative headlines and once again the D-word is linked to cycling. Then again the sport has long had a problem with cortisone abuse and if this can be traced back for decades it remains a concern today with riders abusing prescriptions as cover for muscular injections of cortisone, itself a break of the “no-needles” policy used by the UCI.

Away from the scandal the only certainty is the tests revealed one rider who should not have been racing for health reasons. That’s a good thing. Yet many will join the dots and if this is unfair, that’s the way the game is played. A health test generates the most unhealthy suspicions and headlines. If there’s nothing to hide it’s up to Rolland and his team to explain. If he was using cortisone for medical reasons what did he take? How much? Who’s got the prescription? Can another doctor diagnose and testify the illness that required medical treatment? And so on.

Remember, if the police file was empty the newspapers and TV bulletins were not. It’s the kind of publicity that scares sponsors. Europcar need to shout if they want to be heard.

Photo: with thanks to Flickr’s jomenager.