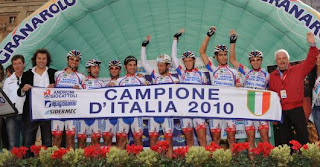 The Androni – Diquigiovanni team were crowned champions of Italy recently, largely thanks to Michele Scarponi’s massive points haul and the team’s persistent focus on the Italian calendar. Scarponi may be heading to Lampre for 2011 but he leaves behind a pleasant surprise for the team: qualification for the Tour de France.

Under an agreement signed in 2008 the top-17 teams in the UCI rankings at the end 2010 would gain entry to a collection of races for 2011 including the Tour de France. And thanks to Scarponi’s second place in Lombardy he managed to lift the Androni team above Ag2r – La Mondiale.

But will this hold? Because the UCI only recently announced the World Tour, a new set of rules whereby the 18 team with a “World Tour” licence will qualify for the big races. And Androni – Diquigiovanni have not applied for one of these licences. Yet this World Tour concept looks to have been announced prematurely. As I wrote the other day, the UCI World Tour seems to have come as a surprise to the Giro d’Italia organisers RCS. Given major race organisers are not on board, it could be that the old “Historic Agreement” remains in place.

A third option?
Maybe ASO will go its own way. Given its Giro focus Androni – Diquigiovanni might not even want to race in July. More likeky with Scarponi gone ASO won’t want them either. Certainly a team lacking motivation to participate will annoy ASO if compared to the prospect of a French squad hungry to take part. ASO might just say “no thanks” and pick a local squad instead.

Summary
Nobody seems to know what will happen with the rules. One of the bizarre aspects here is that on the eve of the 2011 Tour de France presentation we don’t know which teams will be invited, which set of rules will apply. No wonder sponsors don’t want to invest when the rules about qualification to the major events are so vague, and even these notions keep changing. Hopefully this is cleared up tomorrow but don’t hold your breath.

Previous post: What are those flags you see in Italian races?