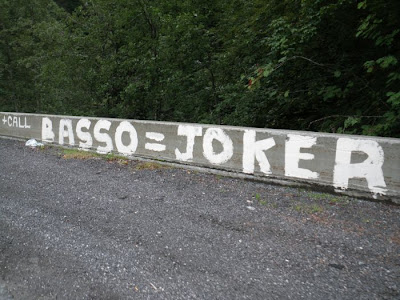 I’ve been waiting to use the above photo for some time. Sent in by a reader some weeks ago, it’s graffiti from last summer’s Tour de France. So when I saw some headlines about Basso aiming to win the Tour de France, I thought the time had come. He had to be joking, right?

Only in giving interviews this week in which he declares his ambitions for the Tour de France, Basso ends up describing these goals with characteristic modesty, saying “My intention is to win the Tour, but that is sought by many riders and so it is hard to achieve“. He sounds pretty realistic rather than hyping up his chances. I think he might well finish on the podium but will find the Schlecks, Menchov, Sanchez and others could thwart his plans.

According to team mate Sylwester Szmyd, Basso has the Alpe d’Huez stage in mind already. It goes without saying that Basso will skip the Giro d’Italia.

I can’t help wonder if he has to focus on the Tour de France because Vincenzo Nibali wants the Giro for himself. At the same time, the Tour de France is hardly a consolation prize and he’s sure to give it his best shot. He’s not joking.