Just a word on Michele Scarponi. He was rumbled for involvement in Operation Puerto and suspended for two years.

I have some sympathy for him as unlike many others, he confessed and took a ban. All whilst he was on a team programme: he was busted and banned yet few team mates got the same treatment. Italians were treated differently from Spaniards.

But despite all this industrialised doping, “Zapatero” never got a big result to speak of. A good rider on hilly races but no more. Only now, he has just come out of the Giro d’Italia as one of its star riders. 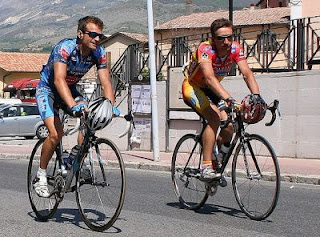 Ok, do we read something into this? Well let’s be generous: he has lost weight since his time in Spain, look at the photo above from Wikipedia, that’s him on the left and his arms and legs are much bigger. One thing is sure, if I was him, I’d be asking for a refund on all the money siphoned to pay Eufamio Fuentes.