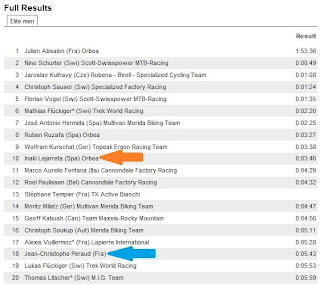 Here are the results from the Elite XC race of the MTB World Cup at Offenback. More details of the racing can be found here. But look closely at the results.

First in 10th place is a familiar name to me, that of Lejarreta. Iñaki Lejarreta is a MTB rider but he is the son of Ismael Lejarreta, a pro road racer who rode with Spanish teams KAS and Teka in the late 70s and early 80s who won the GP Llodio. Iñaki is also the nephew of Marino Lejarreta, one of the best Spanish riders of the 1980s with a colossal palmarès.

Next, look who finished 18th. Despite having signed for Omega Pharma – Lotto, it seems early season revelation Jean-Christophe Peraud can’t keep away from his roots. Speaking to cyclismag.com, Peraud explains it’s beneficial for him to race off road, the lactic acid and intensity will do him good. Fans of Peraud can expect to see him in action on the road in the upcoming Dauphiné and then the Tour de France where he could well be a contender for stage wins and the top-20 on GC is not beyond him.